Out of the punk/oi! wastelands of Massachusetts comes a one man band on a one man war. Andrew Fletcher used to play in The Revilers until last year when he decided to go at it as a lonewolf. The sound is a slow and heavy sound not that far from acts like Templars and early 45 adapters. From what i hear he is set to release an EP later this year (or earlier next year) but untill then he is releasing his first Burden demo through the fifth issue of Neutral Accents fanzine which will be released next week. If you don't like the whole paperthingy you can also pick it up at Rock'n'roll Digrace sometime next month (limited to 100 copies all-in-all).
Good band, good sound.
Upplagd av Bernando kl. 02:08 3 kommentarer:

One of few US streetOi! bands (if thats a genre) that i really like i was happy to hear that Trouble bound had released a new CD some months ago called Unfinished Business. Right now its not available through any distros but the band is selling them on their shows and some local record shops. The band has also released a video for one of the songs (old song re-recorded) and are set to star in some underground drama bullshit called Misery Loves Company. Since i'm more into movies featuring aliens with boobies raping midgets i will probably never watch it but if thats your thing then keep an eye out for the film as well.
Upplagd av Bernando kl. 01:49 1 kommentar: 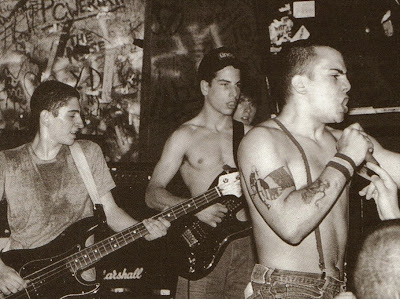 One of the most wellknown and respected skinhead bands to ever come out of America but also one of the most talked about and hated bands no matter what side of the fence you might stand.

The band was founded in 1986 by young kids living in the Sheepshead Bay area of Brooklyn NY. Inspired by the hard RAC sound from UK (Brutal Attack and Skrewdriver) and the local NY hardcore from bands such as Iron Cross and Agnostic Front they made a sound of their own that still to this day can be heard in bands like Tears of frustration and Offensive Weapon.

The bands first proper line-up was Rob on vocals, Nick L on guitar, Nadeem "Dean" Haj on bass and Rishi Puntes on drums. This line-up recorded the bands first cassette called "Skins for skins" in early 1987. Shortly after Rob quit the band and was replaced by "English Nick" who would stick with the band until their way to early demice.

When one talks or read about YDL it always seem to take a turn into politics and as sad as i think this is other than the killer songs they recorded it's pårobably the only thing interesting about them. So just to clear things up (or make people even more confused) let's sort shit out.

YES: The band promoted and encouraged hardline nationalism, white pride and even performed under "fascist banners" at some shows.

YES: The band is the first wellknown RAC band in America and also one of the first RAC bands to denounce racism.

YES: The bands bass-player was Palestine and the bands drummer was a Spanish imigrant and YES they did have a Jewish member at one point.

All these fact make the discussion laughable as most people try to claim them as their own not realizing that grey areas are often larger than the dark and light spots that create them. The band had politics, the band had heritage and the band had personal friendships with parts of the scene that you might not like but in the end of the day the band just that, a fucking band. The fact that some folks around the world still  try to sort out if they where "nazi's" only goes to show that shit never change and my guess is that forums in Russia will discuss if Offensive weapon was a "nazi band" in 2033. People never learn.
The band moved on and so should ignorant politicians within the scene, hell "English Nick" even moved on to the extent of becoming a food critic. 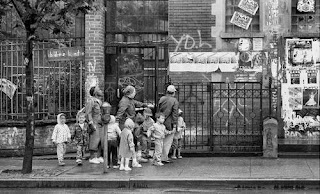 If there is anything more confusing than the bands politics it's the bands discography with few releases under their belt when they where an actual band a ton of releases after they broke up. In this discography i won't try to put up shitty old cassette's but instead try to focus on getting every song by the band out there (which their later collections sum up quite well.
Upplagd av Bernando kl. 04:22 1 kommentar: 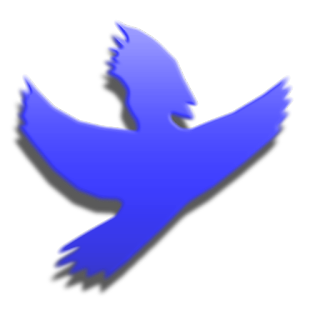 Had another busy week and didnt have time to check my eamils (some blogg-related emails havnt been answered in over 2 months, sorry i will reply sometime in the future). So opening up my email today i was greated by an email from the once great site Rapidshare where i have been sharing my files the last couple of years (and payed them around $12 a month to do so). Since i was busy i had forgotten to pay my monthly fee and as a digital rape they deleted most of my files (24GG turned into 10GB) so i wont ever use their service again.

All those albums i had spent days on days re-uploading where now gone and just as i felt like giving up on it all i remembered the days back in 2001 when i was young, happy, sexually active and using P2P services to share files. Why not?

This is what will happen, every time i upload a new album it will be uploaded to some other site like rapidshare. At the same time i will start to share it on Soulseek (p2p service). For those who don't know about Soulseek it 's a service that used to be the shit for underground scenes back in 1999-2006. All you have to do is go into their homepage and download the program (free) and add me (username: farbrorbla). Simply download any album that has ever been uploaded to the site. Might be left in a que in the beginning but as long as people share what they download it should be effective as hell and probably both faster and more safe than the way i did it with rapidshare.

Oh and please don't ever ask me for a re-upload again since they are all there for the taking. And remember to share what you have downloaded so others can get to it more quickly.
Upplagd av Bernando kl. 06:31 8 kommentarer: 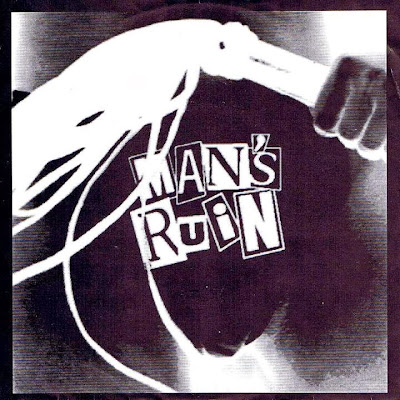 The first release by this female Oi! band that i never bothered uploading back when i did the discography since all the tracks where on their first full-length. Anyways here it is with all the sparkly vinylsounds i know you Oi!hipsters out there love.

Proper good first release by this band that is far from perfect in their sound but as far as femalefronted Oi! bands go they are surely in my top 10. Good selection of songs offer up a near to perfect A-side with my favourite song by the band "Cider woman" and the brutal "Packed with a punch". B-side is mediocre but not in any way bad.
8/10 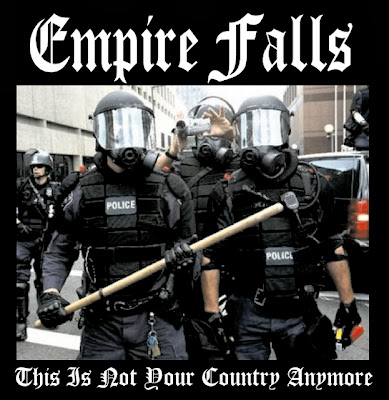 Well there's actually 4 new albums from the band this year but this one is the one to get if you're gonna get one. The band has of late been going down a drain and even if their politics are still a bit to "right winged" and shady for most people to enjoy they surprised many with their last years sideproject "The dirty bunch" proving that they still know how to make a great Oi! record. This time around with their "This is not your country anymore" they move yet another step into the right direction and offer up  8 brand new songs of rough and offensive skinhead r'n'r. Gave up on them a long time ago? Try this one you wont be sorry.

Buy it at Bandcamp

News and liveclip from the east coast

New Jersey boys in Combate 49 are getting ready to release their first full length through This Means War later this year. The album will consist of 8 songs both remakes of old songs and some brand new ones.Check out their homemade (and not so serious) preview for 2 of the new songs

To answer my own rant from yesterday.... Yes! The Wolverines WILL be releasing their first proper 7'' later this year and it will most likely be released through United Riot Records.

Finally some footage from the concert put on by 211 Bootboys last weekend. This clip is Offensive Weapon sounding tighter than ever doing their obligatory YDF cover. 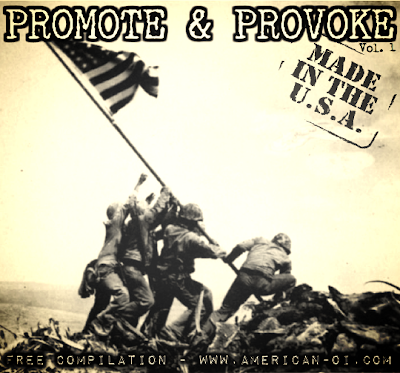 Released as a free compilation by American-Oi in 2013.

It's always nice to see someone else being dedicated to the same shit as you are so i was well happy to see the birth of American-Oi a few months back. I was even more psyched when i noticed the guy behind it was a stand-up guy lacking in the political agendas and scene bullshit that most other folks seem to push these days. Filled to the brink with interviews, reviews and other stuff all free from charge and no hidden commercial interest (seems every other "diehard" today either runs a distro, t-shirt store or try to promote their own bands..). As the site declaired a free compilation (and already in the making of vol.2) i was supposed to post it straight away but work and life got in the way. Anyway here it is.

Even though my prefered choice of modern Oi! bands differ from the bands selected for this comp i must say the site does a bloody good job at promoting and presenting the most current and active bands in the US today. The sounds differ from streetpunk, oi!-core and pure brickwall Oi! giving everyone a chance of enjoying the music weither diehard or just passing through the modern scene.

I wont go in on what bands i dislike since most probably know this by now so instead i'll just pick my favourite new band, favourite song and favourite old band comming back.

Best new band: The hardknocks - American hero's
Unknown new band bringing a great and rough Oi! sound reminding me about the early 90's US sound (Backstreets of American Oi!). Check them out at http://www.reverbnation.com/thehardknocksoi

Best song: The wolverines - Resist
A band with the right attitude and the right gutter sound that keeps on getting better and better every time i hear them. I crowned them the best new band of 2012 together with their NY211 friends in Lonewolf NYC and cant understand how they have NOT released a proper record yet. United Riot Records often has it's ears to the street so hopefully we can see something later this year.

Best comeback: Riotgun - Disposable Generation
They might be a streetpunk band but it's also one of the few streetpunk bands with anything to say these days. Excellent vocals and a song as good as their old underground classic Glory.

It's all free and to be honest it's ten times better than most US Oi!/Streetpunk comps released by "proper labels" this year.

Visit the site and keep your eyes out for a Vol.2 which should be out there any day now.
9/10

Download
(let me know if the download link doesnt work for you since it's the first upload since Rapidshare went nuts)
Upplagd av Bernando kl. 00:22 4 kommentarer: