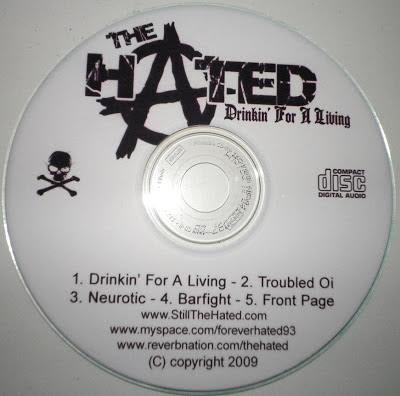 Selfreleased by the band for promotional purposes.

A CD that Neck Records sent to me back when it was current but somehow i forgot about it completly.

The band has been around for almost 20 years now and if it wasnt for this demoCD and their  appearance on Oi! dont pay the bills Vol.2 i dont think i would ever have heard about them. This is quite sad since they actually sound quite good.

The band comes from Delaware and was formed in 1993 and has released a bunch of DIY CD's that are completly impossible to get ahold of today (atleast if you live in Sweden). The last known lineup consisted of  Dan Caruso on vocals, Brian Underwood guitar, Steve on bass and "some guy" on drums. (if you have any of their records feel free to let me know, the ones im looking for is at the bottom of the page in the WANTED list)

Didnt quite like their songs on the Oi! dont pay the bills record but now i realise it was their choice of songs more than the bands sound because this is a damn good CD in the end of the day. It's far from anything advanced and fancy but the opening track Drinkin for a living and the anthem song Neurotic makes it worth a listen. After digging in the most awkward places for the most obscure US bands it's always fun to discover bands like these, why havnt anyone heard of them before? 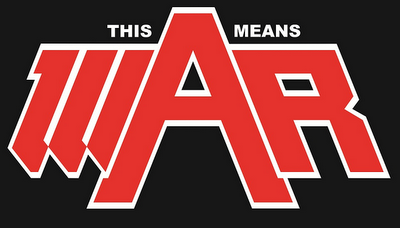 WAR Records (formerly Crowbar) has put up their first online store. It's kind of empty right now but the few this they have are quite exclusive, check it out here
Upplagd av Bernando kl. 00:39 Inga kommentarer:

Released by Spartan Records in 1994.

New singer and somewhat new sound but still the same great band as on the EP. If anything the new singer is even better and i just love how they bring something more to the table by adding some (atleast fo Oi!) advanced guitarparts to some of the songs.
Its nothing for the toughguys with facetattoos though and if softOi! even is a word then it suits this band quite well.
Best song on the record is The other man and as much as the title might fool you it's not about a girlfriend fucking around but instead about racism targeted at people for being white. Another song you should be sure not to miss is The pessimist about being stuck in a rutt and bound to your class (atleast thats how i interprited it while a friend thinks also this one is about white guilt, you can be the judge).
9/10

A new Oi! project has risen with Bryan Scorch (Empire falls, Brutal Tactics, Patriot and B.D.T.R) on vocals and Josh (96 Brigade) on instruments. A classic Oi! sound and just like most other things with Brian involved it is heavily chorus-driven.
The bands selftitled debut album can be bought at Pure impact. Oi! band from what atleast i consider to be the glorydays of US oi!. They where around in the early to mid 90's and even though they are compltely forgotten by most folks these days they made some musical footprints during their active years.
Based out of Nevada, Las Vegas the band consisted of Curtis on vocals Aaron on guitars, Bill on bass and Dave on drums. With this lineup they released their only EP (this one) through Spartan Records. Soon after this release Curtis left the band but with a new singer the band recorded their first and only cd called No guts, No glory and also recorded a song called Alley girl for the infamous Backstreets of American Oi! compilation. Things where looking up for the band but for some unknown reason they just dissolved over night.
Underrated but not forgotten. 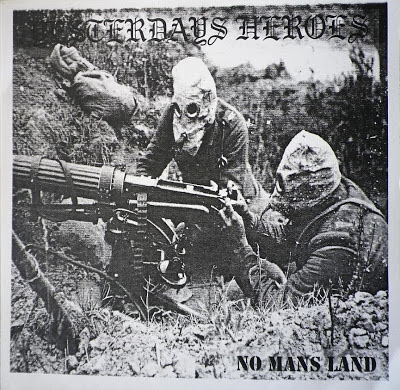 Released by Spartan Records in 1993.

Even though the bands later singer was way better i also love Curtis way of singing. It's far from flawless but has that unpollished sound that suits Oi! when it's utilized in the right way.
All songs but the first later got re-recorded in better versions for their CD but why they left Oppression untouched is a mystery to me since it's the best song on the EP.
Yesterdays heroes both sound like and fit in with the other great unknowns of its time like Brickwall united & Vibram 94, so if youre a fan of the 90's US sound then be sure not to miss this band.
8/10 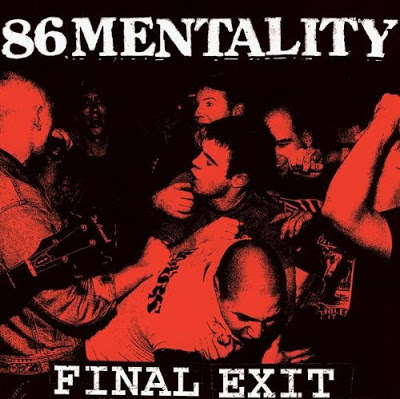 Released by Deranged Records in 2007.

Final exit is just what it sounds like the last album by the band. An ok album with straight hardcore songs, some good some bad but all of them to chaotic and fast (guess thats HC though).
Only song that gave me anything of musical value on this record is the song Degenrate and it stops way to early at under 50 seconds. An ok album but not really my sort of music.
6/10

As most already know Broken Heroes has been kicking down fences in their new mission to bring back US Oi! to it's old ways. They did a great job with their latest album called strictly "This is Oi!", a record free from streetpunk and hardcore influences and also free from the latest trend (Modsy poprock) as the promovideo above displays (a pun intended at Jenny Woo and the Birds of Prey??).
The band is also in the studio getting a new album together that also will focus on the pure Oi! sound or as a member states "pure fucking Oi!". Also be on the lookout for a split they are planning with a European band. Untill those records see the light of day they will appear on various comps comming out (Pirate press comp and a forthcomming Christmas comp).
If this new stuff is anything as good as their latest CD they can count on my money.
//Bernando 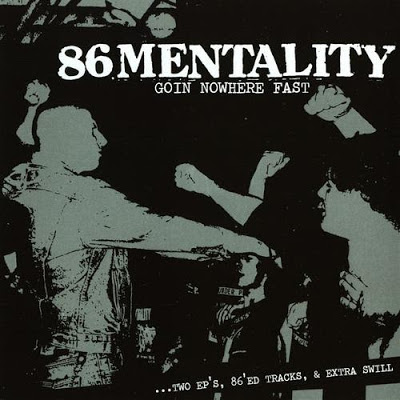 Released by Grave Mistake Records in 2005.

What a cunt of a record. Same issue i have with most of Empire falls records comes back to haunt me here again. The band has released only two 7-inches and has gotten it into their heads that they need to cash in on their career by releasing a "greatest hits" album. Sure might be a nice gesture to people who dont own a recordplayer and want a CD but the fact that the record contains their old EP's (one of them released only months before this record) and the rest is fillouts of garbage live-songs, C-side songs that never made it to a record for a reason and uninspired covers i cant really see why it exists.
More and more bands do this shit these days and some recordlabels even have bullshit deals with their bands giving the bands 0% of the profit (Longshot i'm looking at you) from the sales leaving the bands forced to release discography albums after playing together for just a year. Bottom line is they are a cash-in and i dont give a fuck if the label stole all your money the first time around. Stop being an idiot, cut out the middleman making money of you and release the songs for free (or release that discography album directly).
Why am i complaning? Dont know... hardly remember what i was on the soapbox about in the first place.

Bottom line is every man has the choice to buy them or not... i say download for free instead.
3/10 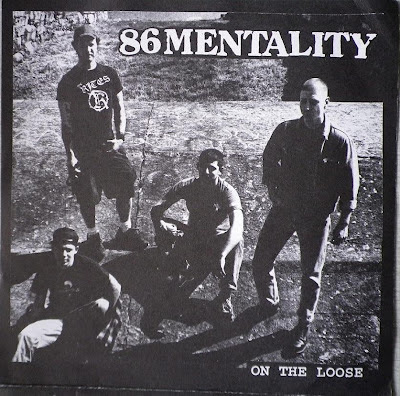 Released by Grave Mistake Records in 2005.

In my opinion the best release and also their most Oi-sounding. Best song in the bunch is Scumbag, a nice and rhythmic Oi!-core track and quite different from how the band sounds otherwise.
8/10


Bringing you down (rough mix) 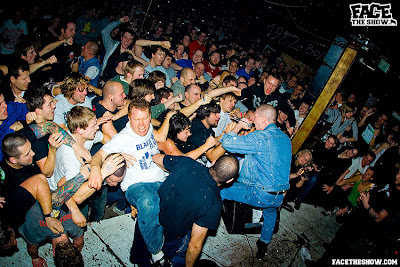 An Oi! influensed hardcore band that came out of Washington about 10 years ago. They quickly made a name for themselfs among the likeminded masses and even though they never made it big like some other hardcore bands they seem to be mentioned as inspiration by new bands (both Oi! and HC) more often than the more known bands, might not buy you a flashy car but atleast it's something to take to the grave...

The band released their first record (this record) in 2004 through Grave Mistake Records, the lineup at the time was Steve Clark on vocals, Judycki on bass, John Mutchler on guitar and Jason Halal on drums. Shortly after their first EP John left the band to start up another band (Set to explode) but was quickly replaced by Steve's friend Matt Moffatt from the band Crispus Attucks. With this lineup they continued to play and record until they put the band on ice in 2007, to my knowledge it was never heated up again and is still on ice except for the odd show here and there. 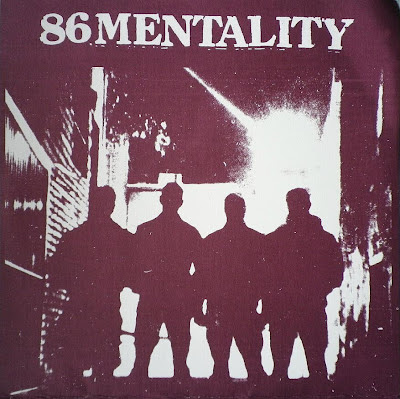 Released by Grave Mistake Records in 2004.

If it wasnt for some guy in the US selling out his collection of old HC for a dollar each i probably wouldnt have bought this EP or the bands second one either. It's not that i dont like it it's just that i have a hard time stomaching most new bands in the genre and their deluded view on what skinhead is. With this said i can now admitt that i fucking love this bands early stuff and both of the records now stand tall next to it's Oi!-brothers in  my crates entitled "US Oi!/Punk/Skinhead rock" even though they dont really belong there.

I am far from an expert in HC but the first thing i noticed is the bands great buildup on this EP with an intro teasing the listeners who know something awesome will come out of it just like the old HCpunkbands used to do (their Washington brothers in Bad Brains to name on). The record continues all the way through to have a distinct feeling of early American HC/PUNK when it was new. No billyclubs on stage, no bandanas on their heads or facial tattoo's of bulldogs just pure oldschool HC..... and for someone not into the modern hardcore toughguy culture i must say it is more than pleasant.
7/10