Does anyone have the lyrics to the song Rikki Rae performed by Everybody poops (Beltones). The text was written by Bill McFadden and even if i have ears to listen with some of the lyrics are a bit unclear for me. So either (1) can anyone hear the complete lyrics or (2) does anyone have an email adress to Bill so i can ask him.
Upplagd av Bernando kl. 09:35 5 kommentarer:

Some info for the comming week and some new re-ups.

I am getting married the 1st of September and without ton of money in the bank or rich parents to cash in we have to do everything ourselfs basicly (baking, cookin going to Germany for cheap booze and on and on and on). Add to this the fact that i study full-time and have to pay my bills in one way or the other i have near to no free time which means my sites will be put on ice untill this bullshit is over with. Will be back in full force in September.
Untill then these are the latest re-uploads as requested. 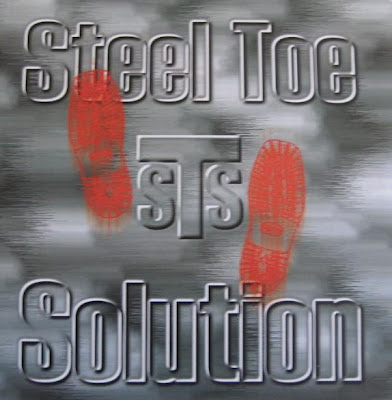 Released by Headache Records in 2000.

Nowdays infamous band from New Jersey that started in 1997 with Reverend "TD" Sinister from Hub City stompers (will get to them in the future) on vocals, Bill Hanilay from Floorpunch Infamy on guitar (replaced by Bern Menthe in 1998) and Gerry Diagelakis on bass (the drummers where to numerous to mention). Their first release was this EP in 2000 and was followed by their discography album called The eight year war in 2005 (also this one on Headache). In 2007 "TD" left the band to focus on Hub city stompers so the band was putt on ice. Gerry Diagelakis went on to start the punkband Decrepit Youth with Rich Sunyak (who played drums for Steel Toe Solution during their later years).
In 2011 they made a breif reunion for a couple of shows but no real "comeback" has been announced.

Even though the band is alright i have always liked "TD"'s skaband better. Even though he might write superb songs his style of singing reminds me a bit to much about Murphy's Law to go down without pain.
All 4 of these earlier songs made it on their 2005 CD and are all of high standards but as i just mentioned "TD"'s way of singing takes away any Oi!-feeling on most songs (especially Wrong side of the pond where he almost bursts out in a fullblown rap).
It's a legendary record in all it's glory but nothing more.
7/10
Download
Upplagd av Bernando kl. 04:01 2 kommentarer: 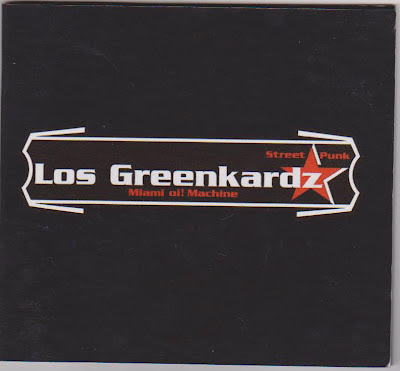 A five-piece from Miami/Florida playing Oi! in Spanish. The band ended in 2008 as far as i know and i don't have a qlue where the members went after that.
They played a couple of shows in the Miami area and even did a gig with the then newly reformed Battlezone, something that rubbs me the wrong way when i found out they had connections to the local fractions of the ARA & RASH (Red & Anarchist SkinHeads). Seems they let their will to play in front of a bigger audience made them forget all those commiebashing songs by Battlezone.

It's an ok record even though it's a bit short but the first song is actually really good and reminds me about Ultima Asalto (but without the childeating brutal vocals offcourse). It's hard to say anything about the soso songs since i dont know Spanish, another thing that rubbs me the wrong way. I know we all have different views on what Oi! is all about but to me it has always had a somewhat tie-in to patriotism or atleast antional unity in some way. I'm not pointing fingers and getting on a soapbox about who is unpatriotic and who is but having a band in America and only playing for the "latino" part of the scene (second/third/fourth/whatever generation) seems all wrong. Well atleast it sounds better than the embarrassing mumblings of some of the "latino" bands who cant even speak proper English even though they are born Americans (Boots with pride i am looking at you).
5/10
Download
The record can still be bought at Adler-Versand.
Upplagd av Bernando kl. 02:37 6 kommentarer: 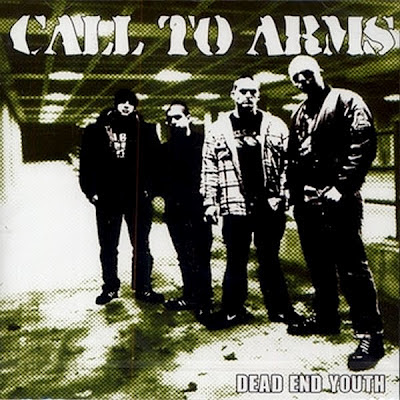 Released by Brutus Records in 2005.

A band from South Bay area in California with members from Nobody's fools playing Oi! with some influenses of streetrock and hardcore. The band wasnt active for a long time and this was their only official release. After the band broke up some of the members went on to form Factory minds.

To be honest this is a quite mediocre Oi! band and none of their songs will blow your mind in any way, with that said they still had some solid songs on the CD. On some song they venture a bit to deep into the lands of streetpunk and punkrock for my taste (Growing up) and some tracks that are good get destroyed by a drummer that overappretiates his own skills with the sticks (Born to booze) or an overusage of backup chants. When the band strays more into their hardcore influences i like them more like on the track Call to arms. The most "Oi!sounding" song and probably the best one is Fallen soldier, a good and heavy song with lyrics about fallen heroes that are long gone to tell their tales of glory.

Nothing extrodinary but if you enjoy a mixture of hardcore buildups and (lets say) The broadsiders you will surely enjoy this band.
7/10
Download
The CD can still be bought at
Brutus (ecrater)
Diehard
4subculture
Rock-O-Rama
Scareystore
Rocknord24
Upplagd av Bernando kl. 02:42 Inga kommentarer:


A young band from California that i dont believe exists anymore. They never released anything except an online EP called Strictly for the streets in 2008 (all songs included in upload). They recorded a ton of songs though and i believe this is the majority of them.

Their sound is far from tight and pollished and what others might hear as shit i hear as something somewhat true to the 90's US sound lacking any of the latest years streetpunk influenses. To me they sound like an amateur hybrid of Boot party and Oxblood with a little bit of Bovver Wonderland thrown into some of the songs.

Most of the songs uploaded here don't really deliver but some are actually really, really good. My favourite one's are Two nights of glory and True till death.

Might not be the best you have heard in a longtime but where the recordingquality lacks the band makes up in pure anger.
8/10
Download
Upplagd av Bernando kl. 01:21 Inga kommentarer: 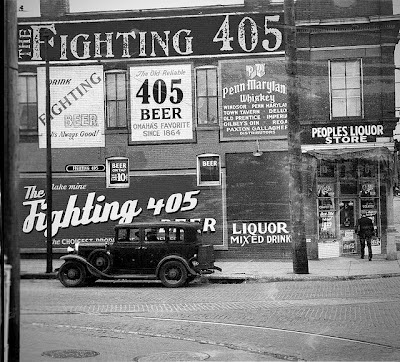 Released by Motherbox Records in 2009.

The band like most of their like come from the backstreets of New York (Long Island to be correct) and consists of Matt Legrady and Steve Morton on vocals and guitars, Carlos Flynn on bass and Mike Simensen on drums. They play punkrock with lyrics about workers rights, working mans struggle and working mans life etc etc etc.

I have never been a huge fan off the whole "Irish unionworkers making softpunk" genre and all that comes with it and the band has never claimed to be Oi! or even skinhead-related so for me to rip and trash them on a site about Oi! wouldnt really be fair.
When i first heard them i listened to the song Middle class on a comp, a song that is one of their more "Oi!ier" songs and a fucking great one at that. Little did i know that their album would be a whole other deal more in the veins of bands such as Street dogs, Social distortion and Hudson falcons. Even though that music isnt for me i can still say i quite enjoyed some of the songs like Revenge where they even sound a bit like Stiff little fingers and Those unknown.
Even though the music they make is far from what i prefer it's still a decent album, probably even superb if your a fan of Hudson falcons and their likes.
6/10
Download
The record can also be downloaded free of charge from the bands site. Dowload
Upplagd av Bernando kl. 02:28 Inga kommentarer: 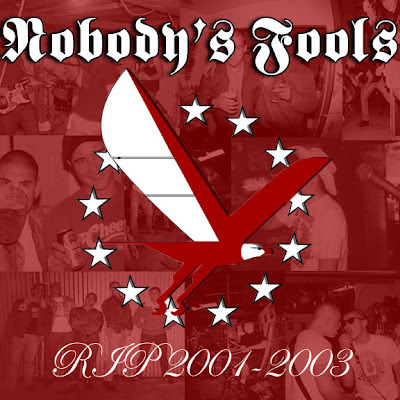 (Note that this is an exclusive teaser before the "re-release" of the Nobody's fool 10'' released later this year on Shout Proud Records. The real release will not feature any of these songs but will instead be a straight pressing of their old EP. For more info on the release and more records from SP check them out on myspace.)

Thanks to Dirk on Shout Proud Records for sending it and also thanks to Rob and the rest of the bandmembers for letting me upload it.

Nobody's fool is one of those bands that remain unknown by most but with their old record and their feature on Skinheads armed with the truth they found their way into both the recordplayer and heart of this old Swede. Their song Take back the scene from the We'll show you record is just like Chapter 21's song United in anger one of those songs i listen to atleast once a week and never seem to get tired of. With this said it's quite clear that i was psyched when i heard about SP Records was finally gonna release it. The 10'' will be out later this year but untill then enjoy these never before released songs (well two of them atleast) on behalf of the band and Shout Proud Records.

Both We'll show you and Drinking nights where featured on the upload i did some years ago so i'll jump right on the new tracks. Making a coversong of a Darkbustersong is destined to fail in my book. Never liked them and never cared much about the band but all i know is that this version is as sweet as it is short. The best song on the demo though is Ballad of the mini mart, as chaotic (and probably drunken) as it is it suits the theme perfectly. Even though the song is about underage drinking and shoplifting i get a heavy Patriot vibe from it. I know atleast i can relate since back in the 90's a famous Swedish beercompany called Pripps Blå decided it was a good idea to give away a free sportbag if a customer bought 4 sixpacks. The way they went about promoting this was by stacking the sportbags near the counter filled with the sixpacks.... we where 15, skinny and had more energy than the sad and lonely worker behind the counter. These bags that we called "rackpacks" resulted in many drunken afternoons and many, many, many sportbags tucked away in my closet still to this day.

With United Riot releasing old Vibram 94 songs and now this release i am actually psyched to be a collector of American Oi! again.