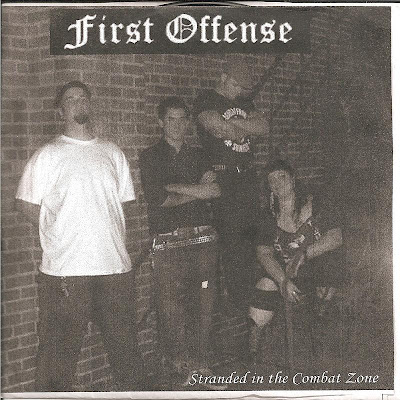 Thanks to Matt for this record. Sad to hear that both your sites are down.

Before i start trashing the EP i must add that this is not in any way bad music, its just not the music i like and as far from what i believe true punk sounds one can possibly get.

Its that all to familuar street-punk mixed with rock'n'roll sound that we hear over and over again as if a whole generation of punks/skins grew up on Rancid and Hudson Falcons alone. I can see that some like this and i dont make it my mission to trash bands who play this music but a band that seems to reappear under the banner of Oi! has to be called out on it. This is not Oi!, bottom line.

Their second song on the EP is an ok rocksong that grows on you but other than that the EP is quite weak. Especially the song Courage in the crowd, who the fuck put that song together? Its a bloody mess!
5/10
Download
The record can still be bought at:
Interpunk
Upplagd av Bernando kl. 03:30 2 kommentarer: 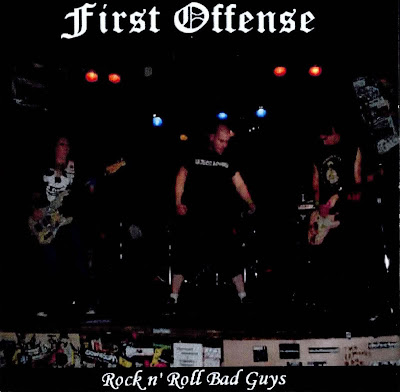 To be honest i have no idea if this release was on CD or LP since this particular one is an onlinerecord. The band now offers it for free through the internet.

I remembered that i liked this album but now going back to it i cant really understand whats so great about it. As streetpunk it works fine but since i never been much for that music i dont understand why i liked it in the first place. Dan sounds a bit to punk for me and even though the choruses are quite catchy there isnt really much that stands out in a positive way.
Basicly your run of the mill streetpunk. If your into that you'll like it but if your taste is like mine then i think you will be dissapointed.
Since i remember that i liked this album and hated the later ones so i am not looking forward to reviewing those next.
6/10
Download
Or download the record without the last track from their bandpage for free.
Upplagd av Bernando kl. 03:09 Inga kommentarer: 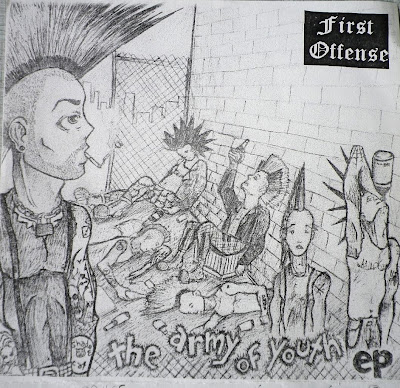 The EP was released by Sewer Scum Recordings in 2000.
The re-recordings was released in 2004 as the Still standing strong EP. Dont know if it was a proper release or a demo though. (Thanks to Jay IRC for sending the 2004 version in)

A band from Ohio that started out as a pure punkproject in 1999 but later changed into more of a streetpunk/Oi! mixture in the mid 00's. The original lineup was Dan on vocals, Troi on bass, Tom & Bryan on guitar, Smitty on drums. The lineup has changed a lot and today only the singer is the original member left.
A band i really liked in the beginning but to be honest i cant really stand the later stuff they have released, the fact that they seem to suck up to Old firm casuals dont really earn them any points in my book either.

Its not in any way a through and through Oi! record but their influences are taken from various original UK bands and that can be heard here.
The coverart is fantastic in that DIY-style and the same goes for the music. Pure punk at streetlevel.
Both Kids that count and Dirty fucking hippies are fantastic the best song is Laced for battle. A track about punk/skin unity, a cliché subject i know but it sounds great.
My big question is why did you guys change your sound when it worked this great?
8/10
Download
Upplagd av Bernando kl. 03:03 Inga kommentarer:

Ignorant and facist muslims in Sweden.

My guess is the aftermath is some people who are not weak cunts (like the ones who sat idly by when this happened) will make a protest against muslim extremism. The media will paint them out as facists and racists and the muslim community will get even more support from the RED/BLACK organisations.
Bloody shame.
Upplagd av Bernando kl. 03:15 10 kommentarer: 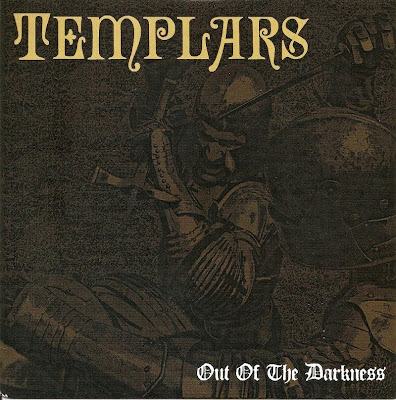 Tracklist:
01. Out of the darkness
02. Weighed down

Released by Templecombe in 2008.

You know the band, you know their sound. Top band, top songs, top ep.
As one gets older its nice to see the bands evolving with you and this is one of those bands. I hope i can still buy new Templars records when i have passed 60.
9/10
Download
The record is sold out of most distros but can still be bought at Angry, young and poor and Headline Records.
Upplagd av Bernando kl. 02:56 6 kommentarer:

A couple of more re-ups

I will try to continue to reupload a couple of them every Friday so keep sending in requests if you notice a link is outdated or taken down by the American forces of freedom.
//Bernando
Upplagd av Bernando kl. 02:40 Inga kommentarer: 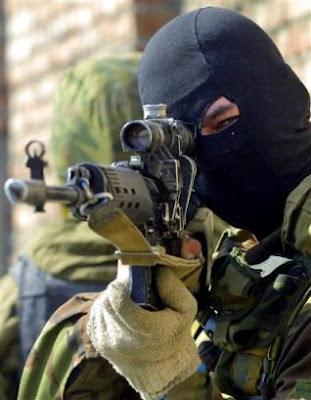 Thanks to Jay from Boot militia for sending it in.

Sniper was an unknown band from Pennsylvania that is best known for their appearance on the East coast of Oi! compilation from 1999 (and not to be confused with the awefull RAC band from Finland). Many have probably wondered if they had anything else and as far as i know this is all they had.

Classic Oi! sound with a melodic and skilled singer. The lyrics are skinhead cliché about "being skinhead" and staying united, you have probably heard it all before but why not hear it once more.
Their song Bare knuckles from the comp is a song burned into my ears so its nice to finally hear something new. All songs are of high quality but Beat the odds is a favourite.
Download
Upplagd av Bernando kl. 02:38 4 kommentarer:

Hooligans party - Doin' it with our boots on Cassette (1999) 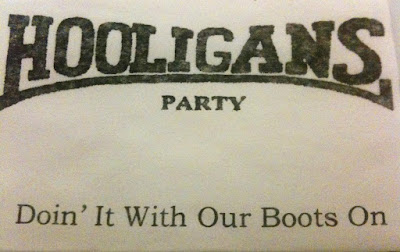 Released on cassette by the band in 1999.

Thanks to Jay from Boot Militia for sending it in.

A band from West Philladelphia that totally flew over my and i guess most others heads to. Never heard about them before i got this one sent to me.
The band consisted of Matt on vocals, Mark on guitar, Andrew on bass and Dave on drums.The band did some shows with other Oi! acts like Sniper and Boot Militia around the time but nothing more really happened.

The cassette has a nice gutterfeeling to it and reminds me about the great first demo by British band Loyalty both in sound and quality. The band sounds somewhat like a mashup of early The bruisers and Best defence and succeds in surprising me in a good way. Its quite fun how a scene i have been a diehard for during all these years still have hidden gems like this band. The themes of the tape is skinhead pride and good old US freedom over all. The best song on the cassette is the tribute to US vets called 21 guns. Damn i miss this sort of sound.
8/10
Download
Upplagd av Bernando kl. 02:31 Inga kommentarer: 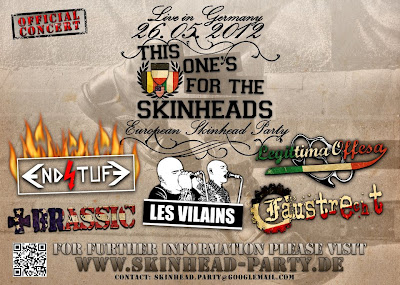 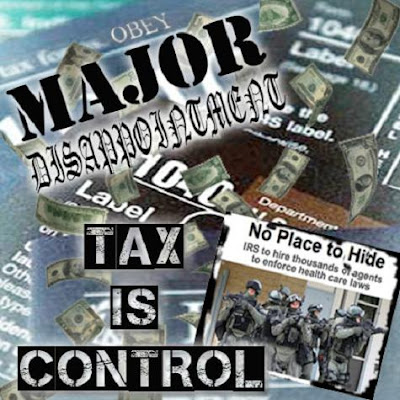 Thanks to the band for sending this one in.

Features the two great songs that was featured on the This is our culture comp and two new songs that might not be of the same quality but far from bad.
Just like on their debut Major Disappointment delivers fast and angry Oi!/Punk. Most lyrics are about the little mans constant assraping by the state and the companies they work for. From what i know the band is currently working on a second album and if it sounds anything like Working poor i know atleast i am looking forward to it.
8/10
Download
Upplagd av Bernando kl. 06:14 Inga kommentarer:

Changed to Rapidfire and re-uped a couple.

With Megaupload's founders being shipped of to jail with rapists and junkies for their crimes against humanity and Mediafire taking it up the ass by anti-piracy agencies by removing users content without asking questions it seems Rapidshare is the last outpost.

Rapidshare is way slower and a bit of a hazzle but better than getting legal uploads removed after a week.

Through Rapidshare i have now re-uploaded some of the albums on my requested upload list.

Will post more re-uploads soon and will also start reviewing new stuff again next week. This black march stuff is some of the most unproductive stuff i have ever been a part of.
Upplagd av Bernando kl. 03:07 Inga kommentarer:

Today mediafire sent a letter that they had removed certain albums i had uploaded at their site. All albums it mattered were sent to me by the bandmembers themselfs or has been ok'ed by the bands in some way (me having email contact with members). Somehow they had gotten it around their ass that Timberland (the rapper) had produced the albums and that his label owned the rights to it. One of the albums was the recently uploaded "Falling down" CD by On trial and to my knowledge it isnt produced by Timberland (haha).
Black march will probably be black 2012 until something changes.
Upplagd av Bernando kl. 07:41 5 kommentarer: 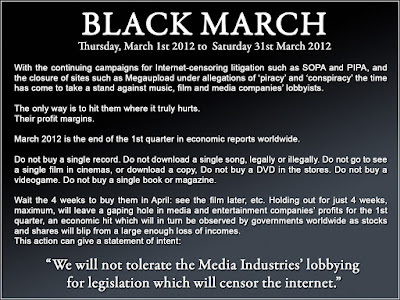 Its a good cause and fighting against the SOPA (which actually translates into garbage or junk in Swedish haha) isnt fighting for piracy, its about liberal freedoms over economic power. If it goes through there will be no more pintrest, youtube or blogger. Other sites have put their sites on block for the comming month but i take the easy way out by simply not posting anything.

Hit them where it hurts and dont buy a single record, movie, videogame or book the comming month. Moneymakers beware, your messing with the buyers now.
http://black-march.com/
Upplagd av Bernando kl. 06:03 2 kommentarer:

Thanks to the band for sending this one in.

Pulling no punches on this demo and my guess is they gain some enemies on the way. Since being nationalist and pro-nation these day is equivalent to being a German in the 40's (yes even in the skinhead scene) my guess is some people will look on them with new eyes. Those who do need to remember that punk in its purest form is rebellion. In an age of internationalsm and globalisation i can think of nothing more rebellious than standing up for your nation. Those who slag this of probably still rock around to The glory it once was by Templars.

With that out of the way i must say its nice to see a band stickin' their nose out in the way that On trial does here. Not only do they refuse to tiptoe the line of political correctness they also deliver one of the best songs i have heard in 2012. Traitor that starts the demo of has one hell of a catchy melody and i cant seem to get the bass out of my head, i am sure that it sounds like an old The cure tune but cant put a finger on which one.

Since the band seem to get tighter by every release i cant imagine how their next album will sound.
Top stuff!
Download
Upplagd av Bernando kl. 02:35 6 kommentarer: