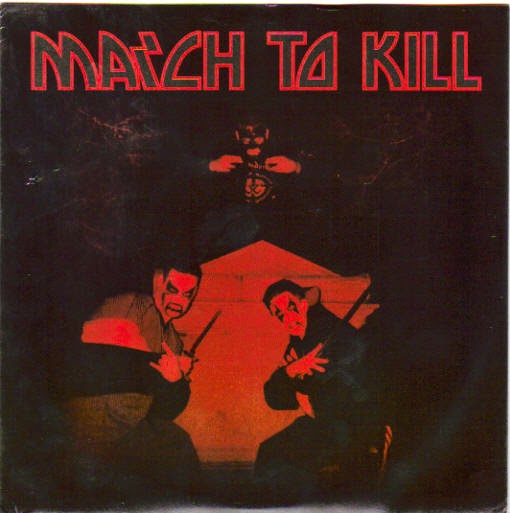 Tracklist:
01. Politically incorrect
02. Some days
03. Roasting mongrol babies over a pagan fire while dancing naked under a pale Westchester moon

When The Unruly disbanded in 1988 the band branched out into two new projects both a bit to rightwinged even for Oi!. Brian Dana started the nazi-band Kick To Kill and Dave, Owen and Scott went on to form the band Marching On. Kick to kill is as extreme as any band might become and when not knitting swastika banners they record songs about hanging black folks and gasing jews. Most of those bands are all on a shockvalue level but Kick to kill has always sounded a bit to sincere for me to enjoy them let alone upload them on a site that i try to keep as far away from extremism both left and right (something that seems hard to do when making a discography page about skinhead music). For this reason i wont feature Kick to kill on the site. Not out of "PC" but because i simply dont enjoy hannging black folks nore do i enjoy listening to songs about it.

Marching On stated their change in their bandname and on their first album in the song Attitude Now with the lyrics "It's not enough for me with patriotism/Now the attitude is nationalism". They keep up that attitude on this release as well and though they try hard to shock it sounds like a later release by The unruly, which is good since i just loved that band.

First song is the best and even though its about their "march on" towards more recht thinkings i can respect it for what it is and what it represents. And lyrics like "You're always preaching unity for the entire human race/But then you go and tell the world that i'm a disgrace/If they where in my shoes they would feel the same" doesnt only sum up why i count myself as a true liberal and respect all views but it also takes up an interesting point in how peoples thoughts are formed. I havnt been in Dave's shoes and cant judge the guy because of it. This might all sound a bit to bookclub and psuedointellectual for most of my readers but its just how i feel about this band and "politically incorrectness/correctness" in general.

Last song lightens the whole debate about politics since its an instumental for pagan bloodrituals (dear lord.
Fans of The Unruly and the Vulture era of Oi! should download it and give it a try no matter what douches they might be sharing a split with.
7/10 (for Marching Ons side)