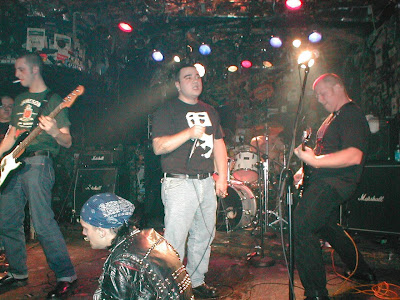 Classic skinhead group from New York playing American Oi! as it should sound. The band is well known for its relaxed stance against all politics in the scene (though personally always a anti-rasicist band). Being a band of "mixed heritage" they never really had to show of their SHARP badges to get axcepted and never carred what peoples beliefs where. Ass their first bassplayer Joe said in an interview "If you happen to be racist, then fine, just don't preach your shit to me cos I don't believe in that. The way I see it, just hate everyone equally.".
The group was founded in early 1995 by Matt on vocals, Sam Baker on drums, Joe on bass and Chris Allas on guitar. They released a 3 song demo in 1995 and quickly became a household name in the east coast scene doing bigger shows then a group with as few songs as they had should do haha (CBGB, The pipeline etc.).
Somewhere around 1996 Joe from The krays played in the group but he was never on any of the recordings so dont know if you can even count him as a bandmember.
In 1997 Matt decided to leave the band and was replaced by Milo Morin and with this lineup they gave it another go and recorded their second demo. This time they hit jackpot and got signed for an album with Trailer park records ( the same that released the awesome Better scene then heard compilation in 1997 here Urban riot appears with 2 songs). This album was released in 1998 and included all their earlier demosongs as a bonus.
With this lineup they also released a 7'' through Fled records in 2000 and after that release the band whent through some lineupchanges and Derek O' Callaghan replaced Joe on bass and Shawn Robinson was added as a second guitarist. With new lineup they released a split 7'' with Maddog surrender in 2001 and also recorded their last record called Public enemies in 2004 (released by Headache in 2005). After that release their drummer Matt suffered from heart disease and had a kid. The band was without a drummer until he re-joined again after getting the OK from his doctor in 2006, after that the band struggled on for another year but eventually died out on its own.

A great band that always will have a place in US Oi! history thanks to their distinct rhytmic sound and also for being one of the bands that stayed true to punk through New Yorks 90's ska-revival into the 00's hardcore twist.
Upplagd av Bernando kl. 08:15